Hyderabad weren’t really at their best during the recently concluded Indian T20 League 2022. With just six wins in 14 games, they failed to qualify for the playoffs. This is the second consecutive edition where the orange army couldn’t make it to the top four.

Having said that, there were a few positives for the 2016-champions as well. Among them, Umran Malik happened to be one of their brightest prospects. It is safe to say that he was the diamond in the rough for Hyderabad. Malik’s ability to generate the extra pace at will was commendable, to say the least.

Besides, he picked 22 wickets in 14 games of this edition. While his bowling average was 20.18, he had an economy rate of 9.03. Thus, he was the fourth-highest wicket-taker of the season. In fact, Australia’s legendary pacer Brett Lee recently stated that Malik reminded him of the great Waqar Younis. He also said that he was a big fan of the Jammu and Kashmir pacer.

“I am a big fan. I think Umran Malik has got a lot of pace to burn. He is a competitor, a top guy, who runs in like a lot of fast bowlers in the past. Waqar Younis is the person who comes to mind,” said Brett Lee, as quoted by Hindustan Times. It is to be noted that Malik’s outstanding performances during the 2022 edition earned him a maiden national call-up for the upcoming five-match T20I series against South Africa.

In the meanwhile, the Aussie legend also backed Virat Kohli to overcome his lean patch. He felt that the 33-year-old needed to take a break, and spend some time with his family. Moreover, Lee was hoping to see Kohli score some hundreds again.

“I am a massive Kohli fan like a lot of people in the world. I just hope that he really gets his opportunity. He just needs some time out. Spend some time with his family, get reset and hopefully, we can see him scoring some hundreds,” he added. 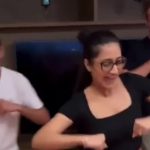