In a major piece of news, England has faced another setback as the senior batter Jonny Bairstow is ruled out of the T20 World Cup 2022 due to a limb injury. He has also been excluded from the last of the ongoing three-match Test series against South Africa. Notably, T20 World Cup is scheduled is commencing in October next month.

Bairstow will also be unavailable for the team to play in the upcoming seven-match T20I series against Pakistan in Pakistan. There are fine chances he will miss the entire series T20I series against the men in green commencing later this month. England will definitely look for a replacement for Jonny Bairstow.

So, here we’ll have a look at the three players who might replace Bairstow in the T20 World Cup 2022 in the English team. Senior T20I batter Alex Hales is one of the very vital elements of the English cricket team. He has proved his worth with the bat in the last couple of years. Hales made his first appearance for England in the T20 internationals ten years back in the year 2011 against India.

Since then, he has impressed everyone with his stellar performances in crucial matches for the team. The 33-year-old has scored 1644 runs in 60 innings of 60 matches with a fine average of 31.01 having a century and eight half-centuries to his name. So, looking at his consistency, the English management can count on him in the absence of Jonny Bairstow. 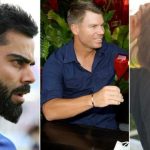