T20 World Cup 2022 is just two months away from now and all teams are preparing for the mega event by participating in bilateral clashes. Speaking of the Indian team, they will also participate in three different competitions including two bilateral clashes against South Africa and Australia following the conclusion of the upcoming Asia cup 2022.

Captain Rohit Sharma and coach Rahul Dravid are looking to prepare a perfect squad for the World Cup by experimenting with some shuffles in the squad. The pace bowling attack is still an unsolved mystery for the Indian team management. It seems like Harshal Patel might not get fit till the major international tournament.

So, here we’ll have a look at three pacers who might replace Harshal in the team India during the T20 World Cup 2022 if he will be unavailable for the tournament. The young pacer from Madhya Pradesh has impressed everyone with his stellar outings in the T20 international since his debut in the T20I series against England. He has also become the only second Indian to bowl a maiden over in the very first over of the T20I career after the former bowling legend Ajit Agarkar.

After playing in six T20I matches, he has scalped nine wickets with a commendable bowling average of 14.55. Apart from this, he also enjoyed an excellent season in the 2022 edition of the Indian T20 League with his bowling. So, there are very high chances that Indian management can count on him in the absence of Harshal Patel during the World Cup. 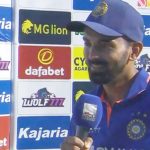