Star Indian batter Suryakumar Yadav amazed everyone once again with his blistering batting against Hong Kong in India’s second match of the tournament. He smashed 68 runs off just 26 balls with six boundaries and six sixes to his name. With the help of his knock and crucial support from former skipper Virat Kohli, India won the match by 40 runs to qualify for the super four round of the Asia Cup 2022.

Suryakumar Yadav was awarded player of the match for his outstanding and match-winning knock for India. Apart from this, there was something else that happened after the end Indian innings and went viral over social media. Actually, the senior batter and former skipper stopped on the ground before entering the dressing room. He waited for Suryakumar Yadav to come near him and when Yadav reached there, Kohli bowed down to him and acknowledged his brilliance with the bat.

Later on, Suryakumar Yadav talked about the match and especially about this heart-warming gesture from Virat Kohli.

“That was a great heart-warming gesture for me because I had never seen that. I was wondering why he was not walking ahead, initially, he was behind me (walking off) and then I told him, let’s walk together. He is such an experienced batter, I really enjoyed batting with him. That’s what I told him after the first innings and even after the match ended…that I really enjoyed batting with you. Our plans were clear, we talked a lot out in the middle, what to do in what situation, for eg what to do in the next two balls …it is vital to have that experience out in the middle because I have not played that many T20s compared to him (Virat Kohli). So, it was great fun,” said Suryakumr Yadav while speaking to reporters in Dubai.

Furthermore, he also talked about his plans before for batting against Hong Kong in the match. The 32-year-old also opened up about his chat with Virat Kohli before batting and what the latter advised him.

“The situation was such that I had to go and bat out in the middle the way I did. At the start, the wicket was a bit slow. Once I got in and after a chat with Virat (Kohli), he told me just express myself, and bat the way I usually bat. My plans were absolutely clear on the way to bat…and I really enjoyed it,” the world number two T20I batter added later. 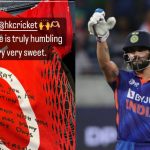 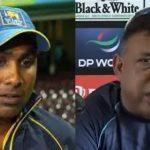