India faced Hong Kong in their second match of the Asia Cup 2022. India was coming off a victory against Pakistan in their opening match of the campaign in the tournament. In this match, India batted first after losing the toss and posted a total of 192 runs for the loss of two wickets in the allotted 20 overs.

While chasing the target, Hong Kong could score only 152 runs for the loss of five wickets in 20 overs. Eventually, India clinched the match by five wickets and secured their berth in the super four round of the 15th edition of this continental tournament.

The Indian cricket fans have also shown their creative brains after the match India is also the first team to qualify for the next round from Group A. They came up with some creative and hilarious memes on Twitter.

Here’re some of the memes posted by fans on Twitter after India’s win:

A guy like this has 261.54% chance of stealing everyone's heart ❤️ pic.twitter.com/m8jM94HWqZ

Bollywood movie about to release.

And at that moment he knew, he messed up! #INDvHK pic.twitter.com/BLAEALznrR

Speaking about the match, then skipper Rohit Sharma and KL Rahul opened the innings for India and made a partnership of 38 runs in the 4.5 overs. Rohit fell prey to Ayush Shukla on the penultimate delivery of the fifth over. After that, senior batter KL Rahul and former skipper Virat Kohli stitched a partnership of 66 runs for the second wicket. KL Rahul got out at 36 runs off 39 balls with two sixes.

After KL’s dismissal, Virat Kohli sojourned there in the middle till the end and made an unbeaten partnership of 98 runs for the third wicket. Virat scored 59 runs off 44 balls with a boundary and three sixes. Other than him, Suryakumar Yadav also amazed everyone with his blistering knock of 68 runs off just 26 balls with six boundaries and six explosive sixes.

On the backs of these brilliant knocks, India posted a total of 192 runs for the loss of two wickets in the 20 overs.

While chasing the target, Hong Kong had a very poor start as they lost their first wicket only on the score of 12 runs. Senior batter Babar Hayat played a struggling knock of 41 runs off 30 balls with three boundaries and two sixes. Other than him, number four batter Kinchit Shah also played a knock of 28 runs with two boundaries and a six to his name.

But Hong Kong couldn’t cross the line and scored only runs for the loss of wickets. Eventually, India won the match by runs and secured their berth in the super four round of the tournament.

India won both group matches against Pakistan and Hong Kong

Notably, India has now become the second team to qualify for the super four round of the 15th edition of the tournament after Afghanistan. Earlier, Afghanistan defeated Sri Lanka and then Pakistan in their two group matches to reach the super four. 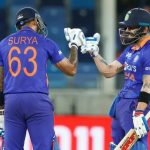 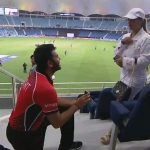