India and New Zealand locked horns in the third and final ODI of the series at Holkar Cricket Stadium in Indore. India had an unassailable lead of 2-0 and were determined to whitewash the kiwis. New Zealand captain Tom Latham won the toss and elected to bowl first.

Team India scored a mammoth 385/9 as they rode on the batting heroics of openers Shubman Gill and Rohit Sharma who scored their respective hundreds to set the tone for the middle order.

Indian openers walked out to the middle determined to whitewash the kiwis in the series. They started their innings cautiously in the first two overs but got into the groove in no time after scoring quick boundaries. The opening duo put on a mammoth 212 off 157 balls as Rohit scored 101 off 85 balls while Gill scored 112 off 78 balls.

In reply, New Zealand lost their opener Fin Allen in the first over itself for a duck. After the fall of the first wicket, Henry Nicholls and Devon Conway added 106 runs for the second wicket. The partnership was broken by Kuldeep Yadav who dismissed Nicholls for 42 off 40. At the other end, Devon Conway continued his magnificent innings and brought up his century off just 71 balls.

Kuldeep Yadav and Shardul Thakur picked up three wickets each

New Zealand were cruising at 184/2 after 25 overs as Indian captain Rohit Sharma threw the ball to the man with the golden arm Shardul Thakur. Thakur once again didn’t disappoint and picked up two wickets on consecutive balls dismissing Daryl Mitchell and Tom Latham.

He further removed Glenn Phillips in the next over to break the back of New Zealand’s batting leaving them at 200/5 after 27.4 overs. Devon Conway’s innings was also ended in the 32nd over he departed for a well-made 138 off 100 balls leaving his team at 230/6 after 31.4 overs.

Michael Bracewell couldn’t repeat his heroics of the first ODI and could only manage 26 off 22 balls before getting stumped against Kuldeep Yadav.

After Bracewell’s wicket, it was just formality as the New Zealand tail failed to give support to Mitchell Santner. The southpaw was the last man standing for the kiwis as he scored 34 off 29. He was dismissed as the final wicket in the 42nd over by Yuzvendra Chahal. As a result, India won the match by 90 runs and whitewashed the kiwis 3-0 in the ODI series.

Kuldeep Yadav and Shardul Thakur shined with the ball for India as they picked up three wickets each.

Twitter was abuzz with several memes on India’s win. Here are some of them:

I think boundaries in women’s cricket are bigger than this, lol. #INDvNZ pic.twitter.com/6LGNslhcLM 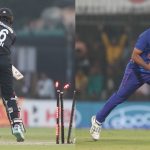