Former Indian skipper Virat Kohli is finally back in a form which is a piece of quite good news for his fans. The 33-year-old has scored some fine knocks in the ongoing Asia Cup 2022. He played a very good knock of 60 runs off 44 balls with four boundaries and a six to his name in the recent super-4 match against Pakistan.

Other than that, he scored 35 and 59 respectively in the group matches against Pakistan and Hong Kong. Notably, he was on the receiving end of criticism from the experts and some cricket fans for his poor run of form with the bat.

Recently, the right-hander has spoken out of his heart about the strong bond and connection with the former legendary Indian skipper MS Dhoni. The Delhi batter also spoke about the various things which he experienced during his lean patch including the criticism and critical analysis from the experts and the former veterans of the game.

“When I left Test captaincy, only MS Dhoni messaged me. A lot of people have my number, but no one messaged me. The respect and connection with him are genuine. neither he is insecure about me, nor I am insecure about him,” said Virat Kohli while discussing his bond with MS Dhoni.

Later on, the veteran of 70 international centuries also talked about the criticism on the television shows about his form. He also indirectly indicated toward the experts and some of the former players who criticized him during his lean patch.

#WATCH | When I left Test captaincy, only MS Dhoni messaged me. A lot of people have my number, but no one messaged me. The respect and connection with him (MS Dhoni) is genuine… neither he is insecure about me, nor I am insecure about him…: Virat Kohli, Indian cricketer pic.twitter.com/kSTqAdfzs5

“If I want to say anything to someone then I reach out to the person individually. When you even want to help someone then don’t give a suggestion in front of the world then it would not have any value to me. If you are really concerned about me then you can have a direct talk with me that you genuinely want me to do well. Somehow, I live my life very honestly so these things are visible to you. I would not say that it doesn’t bother me but the truth is in front of you when you deliver things with honesty. I live my life the same way as you can’t do anything as almighty is there to acknowledge your work and honesty. So, I will keep playing like this till I am here on the field,” he added later. 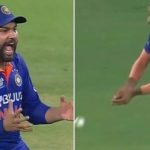