Star Indian wicketkeeper-batter Rishabh Pant is not going through a good patch with the bat. He is currently struggling for runs during the ongoing Asia Cup 2022. He couldn’t deliver up to the expectations for India in the first super-4 match against Pakistan. He scored only 14 runs off 12 balls with only two boundaries. Pant lost his wicket on a reverse sweep shot.

Later on, skipper Rohit Sharma went on to lash out at the 24-year-old in the dressing room. He asked for an explanation from Pant for a poor shot selection during such an important clash. The video of which has gone viral on social media.

Other than that, the Indian cricket fans are also trolling him for playing a non-required shot at a crucial juncture in the match. They took to Twitter for bashing the southpaw.

Here’s how Twitter reacted to the performance of Rishabh Pant:

This loss is a message for @BCCI to stop playing management quota player Rishabh Pant in T20is.

His stats are just pathetic

Don’t blame it on Arshdeep alone – the lone missed catch! What about #bhuvneshwarkumar? What is #RishabhPant contribution as batsman? #INDvsPAK2022 #RohitSharma #arshdeepsingh @BCCI crying & begging for changes at its leadership! @narendramodi @narendramodi_in

When selected as a specialist left handed batter in the top order for #TeamIndia the onus is on #RishabhPant to bat more responsibly. Though he is known for his unorthodox shots, I think he should be matured enough now to pick the right balls for his shots. #INDvsPAK #AsiaCup2022

Rishabh Pant plays loose shots on every important occasions and gets out, thereby putting team in trouble. It's his nature and repeatedly doing this. No learnings.

Now talking a bit more about the match between India and Pakistan, then the Pakistani skipper Babar Azam won the toss and asked the Indians to bat first at the Dubai International Cricket Stadium. Batting first, the Indians managed to post a decent total of 181 runs for the loss of seven wickets in the allotted 20 overs. Former skipper and senior batter Virat Kohli played a very good knock of 60 runs off 44 balls with four boundaries and a six to his name.

While chasing the target, the men in green managed to cross the line in 19.5 overs and scored 182 runs for the loss of five wickets to defeat Rohit Sharma & co. Star batter Mohammad Rizwan ended up as the highest run-scorer for Pakistan with 71 runs off 51 balls followed by a blistering knock from Mohammad Nawaz who smashed 42 runs off just 20 balls with six boundaries and two sixes on his credit. Nawaz was awarded player of the match for his amazing performance against India. 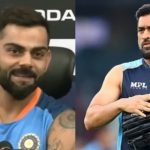