India and Australia proved their might in the three-match T20I series that concluded on Sunday (September 25). There were many moments from the match that one could cherish for a lifetime. Rohit Sharma kissed Dinesh Karthik’s helmet and it became the talk of the town as their bromance traces back to 2007.

For the unversed, Virat Kohli and the Indian skipper have always been in the headlines for a rumoured rift. The duo is often considered to not have a great bond between them. It all started during the 2019 World Cup semi-finals when the two were caught having a heated argument. However, Virat Kohli and Rohit Sharma have been shutting the critics with their friendly gestures of late.

Speaking of the third T20I, Rohit Sharma gave a pat on Virat Kohli’s back once the veteran made his way back to the dressing room after playing the anchoring role. However, post the conclusion of the match, Virat Kohli hugged the Indian skipper and celebrated the win in style. The Indian veteran was seen sitting near the Mumbai batter from the Indian T20 League. Once the team won, the Delhi-born did not shy away from hugging and patting Rohit Sharma to celebrate the win.

The video went viral and the duo proved yet again that they share a great bond.

The bond between these two is beyond perfection. Fans should understand this. #IndvsAus pic.twitter.com/qtklkMUsDQ

Speaking of the innings from Virat Kohli, he played the anchoring role. The Indian team won the match with one ball to spare, and one must thank Suryakumar Yadav who played a terrific knock. The 32-year-old amassed as many as 69 runs and helped the team to keep the run rate under check.

Virat Kohli, who witnessed the marvel from the other end, kept anchoring the innings by giving the strike to Suryakumar Yadav. The Indian legend bagged his 33rd T20I fifty and helped India inch closer to the target. India bagged the series 2-1 and the team is all set to take on South Africa before boarding the flight to Australia. 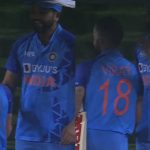 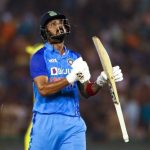