India and Australia locked horns in the decider at Hyderabad and it turned out to be a cracker. One could only imagine the reception that the Indian players would have got in such a terrific stadium. Indian batter Suryakumar Yadav played a stellar inning for team India and proved his batting prowess yet again. Virat Kohli backed him up with a decent inning and anchored it till the end.

But what caught the fans’ eyes was the moment when Rohit Sharma lauded the Indian veteran for staying till the end. For the unversed, India required eleven runs in the last over and Virat Kohli perished after scoring a maximum on the first ball. However, the Indian skipper did not shy away from lauding the legend for his well-crafted innings.

As soon as Virat Kohli reached the pavilion, the Indian skipper gave a pat on his back as he climbed the steps to the dressing room. As one could expect, the video went viral right away and it was one instance where the fans of both stars joined hands together.

Speaking of the match, the Indian skipper won the toss and elected to field first. It turned out to be a cracker of a game that went down the wire. To comment on Australia’s innings, Cameron Green scored a stunning half-century up front in the powerplay. Despite a batting collapse in the middle order, Tim David’s fifty in the back end helped Australia put on a total of 186.

However, the Indian openers did not get off to a great start as KL Rahul and Rohit Sharma crumbled in quick succession. Then came the hero of the night Suryakumar Yadav who kept coming up with unorthodox shots. The crowd at Hyderabad went berserk on seeing a guy from Mumbai launch the ball into the crowds at ease.

Indian veteran Virat Kohli backed the youngster with a fifty to his name and stayed till the end. However, once Suryakumar Yadav perished, it was Hardik Pandya who sealed the game for India with a boundary in the last over. All said and done, India won the series 2-1 and looked confident about facing South Africa up next. 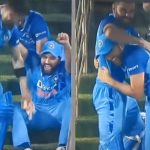