Former legendary Pakistani skipper Shahid Afridi has recently opened up on the visuals of her daughter carrying an Indian flag during the match between arch-rivals India and Pakistan. It happened during the second clash of both teams in the Asia Cup 2022. The video and snaps of Afridi’s daughter have gone viral on social media.

“My wife told me that there were barely 10% Pakistani fans in the stadium and the rest were Indian fans. Pakistani flags were not available there so my younger daughter was waving the Indian flag. I received the video, but I was unsure about whether to share it online or not,” said Afridi in his latest YouTube video.

Talking about the campaign Pakistan in the ongoing edition of the Asia Cup, then they have won three out of the matches played so far in the tournament. In the last super-4 match of the continental tournament, they lost to the Sri Lankan side by five wickets.

Apart from that, both Sri Lanka and Pakistan have already qualified for the final of the 15th edition of the Asia Cup. The men in green will be eyeing on to clear off their account of defeat against Sri Lanka in the super-4 match. Whereas on the other hand, Sri Lanka will also want to continue their golden run in the tournament.

Discussing a bit more about the last match between Pakistan and Sri Lanka, the Lankan tigers completely outplayed Babar Azam & co. Sri Lanka bundled up the Pakistani team only on the score of 121 runs in 19.1 overs. While chasing the target, Dasun Shanaka’s men comfortably crossed the line in 17 overs to win the fourth consecutive match. 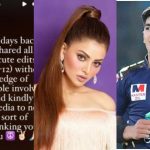