India and Australia are all set to lock horns with each other in the second of the three-match T20I series. Both teams will play this match at Vidarbha Cricket Association Stadium in Nagpur. The visitors are leading the series by a margin of 1-0 after winning the first match against India by four wickets.

Speaking from the point of view of the Indian team, then senior pacer Jasprit Bumrah was not a part of the playing XI in the first match against Australia. The poor performances of the Indian bowlers in the death overs echoed the point that Bumrah should be called back into the playing XI for the upcoming match of the series.

Although, in a good piece of news, star Indian batter Suryakumar Yadav has confirmed the availability of Jasprit Bumrah to be in the playing XI for the second match against Aaron Finch & co.

“Bumrah is fit and ready to play in the second match,” said Suryakumar Yadav in the press conference ahead of the second T20I against the men in yellow.

Jasprit Bumrah fit and ready to play, confirms Suryakumar Yadav ahead of 2nd T20I against Australia

Speaking of the first match of the series, then the Indian side posted a decent and big total of 208 runs for the loss of six wickets in the allotted 20 overs. Star all-rounder smashed a swashbuckling knock of 71 runs off just 30 balls. Other than him, senior opener KL Rahul and star batter Suryakumar Yadav also played the knocks of 55 runs and 46 runs respectively.

While chasing the target, Australians crossed the line in 19.2 overs to score the line in 19.2 overs to win the match by four wickets to gain a lead of 1-0 in the series. Young batter Cameron Green played a match-winning knock of 61 runs off just 30 balls. Senior wicketkeeper-batter Matthew Wade also played a very crucial knock of 45 runs to take his home in the curtain raiser of the series. 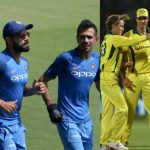