Former Indian skipper and senior batter Virat Kohli has finally scored his 71st international century after a long wait of three years. He took 1021 days to achieve this feat again in international cricket since the last century he scored against Bangladesh three years back in November 2019.

Apart from this, senior Indian batter KL Rahul’s answer to a journalist on Virat Kohli in a post-match press conference has gone viral over social media. It all happened when a journalist happened to ask Rahul about the opening position of Virat Kohli.

“We’ve seen in the IPL that Virat Kohli has hit five centuries while opening the batting. He scored a century today again while opening so as vice-captain will you tell the team management that Kohli can be tried as an opener in the Australia and South Africa series and also in the World Cup?” asked a journalist Rahul

“Toh kya main khud baith jau phir? Kamaal hai (Are you suggesting that I should then sit out? Amazing).”

Now talking about the match between India and Afghanistan, then the Afghan skipper Mohammed Nabi won the toss and asked the Indians to bat first. India posted a massive total of 212 runs for the loss of only two wickets in the 20 overs. Former skipper and senior batter Virat Kohli smashed 122 runs off just 61 balls with 12 boundaries and six sixes to his name. Other than him, stand-in skipper KL Rahul also played a magnificent knock of 62 runs off 41 balls with six boundaries and two sixes on his credit.

While chasing the target, Afghanistan could score only 111 runs for the loss of eight wickets in 20 overs and lost the match by 101 runs. Virat Kohli was adjudged player of the match for his sensational knock.

Both India and Afghanistan have been knocked out of the tournament after losing their matches in the super -4 round of the ongoing addition of the continental tournament.

India will now host Australia and South Africa in the T20I series before the commencement of the T20 World Cup 2022 which is to be played in Australia next month. 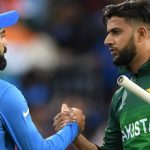