In the India vs New Zealand 3rd ODI match, Virat Kohli was caught on camera watching a replay of him dancing on the cricket pitch on the big screen in the stadium. The former Indian captain, known for his energetic and passionate style of play, was seen tapping his feet and nodding along to the music as the replay played in the background.

Kohli Kohli watching himself dance on the big screen
What a lovely character he is ❤️ pic.twitter.com/ly1XFgCcpc

The match, played at the Holkar Stadium in Indore, was a high-scoring affair with India coming out on top by a comfortable 90-run margin. The home team put up a formidable score of 385/9 in their first innings, with Rohit Sharma scoring 101 off 85 and Shubman Gill making 112 off 78.

In reply, New Zealand could only manage 295 runs in 41.2 overs, with Devon Conway putting in a valiant effort with a score of 138 off 100. The Indian bowling attack, led by Shardul Thakur, was too strong for the Kiwi batting line-up, with Thakur taking three wickets and being adjudged the Player of the Match.

With this win, India whitewashed New Zealand by 3-0 in the 3 match ODI seies. The Rohit Sharma-led team will be hoping to continue their winning momentum into the T20I series starting from January 27th.

Off the field, Virat Kohli’s antics on the big screen added to the already electric atmosphere in the stadium and provided a moment of light-hearted entertainment for fans in attendance. The Indian skipper’s playful nature and infectious energy have always been a major talking point among cricket fans, and this was yet another example of that. 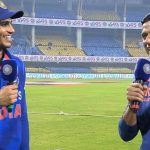