Pakistan and Hong Kong met each other in a do-or-die match and it was the Hong Kong skipper who won the toss and elected to field first. Sharjah Cricket Stadium hosted the match and teams were well aware of the fact that the pitch favors spin bowling. Mohamad Rizwan and Babar Azam marked the crease but the latter perished earlier than expected for just nine runs.

It was Mohammad Rizwan and Fakhar Zaman who started to take the lead and took the team forward at a steady pace. However, the Hong Kong bowlers kept it really tight for the Pakistani batters and they struggled to time the ball.

With things not going Pakistan’s way, Yasim Murtaza added more fuel to the fire by executing the same plan that he used against India. The bowler came up with too many slower balls and it affected the game overall.

However, towards the end of the innings, Mohammad Rizwan and Fakhar Zaman started finding their timing right and cleared the ropes pretty easily. The latter perished after making a great half-century to make way for Khushdil Shah. The wicket came as a blessing in disguise for the Men in Green as Shah smacked all the balls and managed to power Pakistan to a total of 193/4 in twenty overs.

Skipper Nizakat Khan and Yasi Murtaza opened the innings for Hong Kong and things looked unsettled at their camp as they looked low in morale on the back of poor death bowling. Their star batter Babar Hayat bagged a duck and things got tougher and tougher for the red team. At the end of the powerplay, Hong Kong had lost three of their main batters already. On the second delivery post powerplay, they lost their fourth wicket too.

Within eight overs, Hong Kong lost half of their batters and looked on course to a humiliating defeat as Mohammad Nawaz picked up the fifth and sixth wicket for Pakistan. The Men in Green eventually won the match by 155 runs as Hong Kong succumbed for just 38 runs and it was the former who made it to the next round. Here are some of the interesting tweets that popped up right after the match:

Its gonna be Super Sunday again.
As expected….one more IND vs PAK
Best of luck both teams.#PAKvsHK 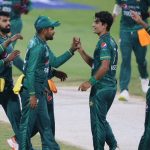