India and Pakistan crossed their swords in a nail-biting thriller during their first match of the super-4 round in the Asia Cup 2022. Pakistani skipper Babar Azam won the toss and asked the Indians to bat first at the Dubai International Cricket Stadium. Batting first, India managed to post a total of 181 runs for the loss of seven wickets in the allotted 20 overs.

While chasing the target, Pakistan managed to cross the line in 19.5 overs and won the match by five wickets. Mohammad Nawaz was awarded player of the match for his blistering knock of 42 runs off just 20 balls with six sixes and two boundaries on his credit. Former skipper and senior Indian batter Virat Kohli’s knock of 60 runs off 44 balls went in vain.

This defeat against Pakistan gave Indian fans a chance to show their creative minds on Twitter and posted some memes. They went on to share these memes on the microblogging site.

Here’re the creative memes fans posted after India’s defeat in the super-4 round:

Everyone blaming Arshdeep Singh for the loss in #INDvsPAK game meanwhile Bhuvaneshwar Kumar in the corner#INDvsPAK pic.twitter.com/xVbpED9Pcq

1. Me last Sunday
2. Me this Sunday pic.twitter.com/O8Nlxtz5hK

Arshdeep singh bowling the final over after missing the catch : pic.twitter.com/CBuTFDjnyC

Speaking of the match, the Indian side, then skipper Rohit Sharma and senior batter KL Rahul started the innings of the Indian team. They both made a partnership of 54 runs in the 4.5 overs for the first wicket and provided a strong start to the team. Both Rohit Sharma and KL Rahul scored 28-runs each.

Following the dismissals of Rohit Sharma and KL Rahul in quick successions, former Indian skipper Virat Kohli took the charge from that stage. He played a steady and brilliant knock of 60 runs off 44 with four boundaries and a six to his name. On the backs of these few fine knocks, India managed to post a total of 181 runs for the loss of seven wickets at the end of the first innings. Pakistan’s vice-captain and star all-rounder Shadab Khan scalped two wickets for the team.

While chasing the target, Pakistan faced an early blow in the fourth over of the match when skipper Babar Azam fell prey to the young Indian spinner Ravi Bishnoi at the individual score of 14 runs off 10 balls with only two boundaries. Pakistan lost their first wicket at the score of 22 runs. Star batter Mohammad Rizwan played a good knock of 71 runs off 51 balls with six boundaries and two sixes on his credit. Other than him, also played a fine knock of runs. Eventually, the men in green managed to cross the line in 19.5 overs to defeat India by five wickets in their second meetup in the  Asia Cup 2022.

Mohammad Nawaz Was awarded the player of the match for his match-defining performance for the men in green. 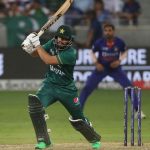