The Indian cricket fans are crazy about the game to a different level. The love and passion they show for their team are parallel to none. One such passion was seen among the fans in Hyderabad (India). After all, the city is hosting a cricket match after almost three years. The last time a game played at the Rajiv Gandhi International Stadium was between India and the West Indies in late 2019.

Meanwhile, a few days ahead of the game, the fans in Hyderabad have been gearing up for the India-Australia game. However, due to overcrowding and mismanagement, the fans have been beaten up by police standing at the venue. This incident has been the talk of the town as the Hyderabad police have been criticized for their behavior. Reportedly, 20 people were left injured after the stampede broke out.

The lathi charge was done after the tragedy. The angry fans have said that the online sale of tickets was stopped after 10 minutes which is why they were standing in queues. They also alleged that the tickets were sold on a black market.

Senior sports journalist, Boria Majumdar has taken to Twitter and criticized the Hyderabad Cricket Association. He asked why the police resorted to lathi charge.

.#HyderabadCricketAssociation someone should come out and issue a statement about why this happened. How did things get to this! Why! How can police lathi charge? How do you beat fans? How do you treat them as criminals? You are there because of the fans. https://t.co/8gHSAeStcq

It will be interesting to see how the Indian Cricket Board looks into the matter. Meanwhile, talking about the series, the Men In Blue are trailing by 1-0 in the series. Before heading to Hyderabad they will play the second T20I in Nagpur. They would need to win the game to keep the series alive.

Lathicharge near Gymkhana where tickets were being distributed

Let’s see what Mr Drama Rao who has an opinion on everything has to say about this pic.twitter.com/HBqWJKYHuM

Chaos ahead of 3rd T20 between India and Australia. #Hyderabad match ticket allocation in shambles. Police lathi charge in effect. #HCA has reputation of most corrupt board in India and that’s being validated today.#INDvsAUS @KTRTRS pic.twitter.com/UWT0kAyMhO

Mismanagement, poor planning you call it anything but they had to go through lathicharge, stampede and pathetic scenes at Gymkhana Grounds when they wanted to buy tickets for #Cricket Match to be held at Uppal Stadium #Hyderabad pic.twitter.com/kWmSJUH7bt

Pathetic situation near Gymkhana grounds hyderabad. Lathi charge and everything. Some of them were even unconscious including a police officer .One of the worst managements ever.
#INDvsAUS #Hyderabad pic.twitter.com/iyr5UyXX7w

Hyderabad Cricket Association is not fit for hosting International matches, From Ticket distribution to crowd management everything is done in a haphazard way. If this is the case for a normal bilateral series, imagine hosting a WC match. https://t.co/Y80yThAJKy

What's the point of boasting Hyderabad as IT investment destination in India when you can't use its services for a simple ticket sale ?@KTRTRS , @azharflicks both of you should feel ashamed of how corrupt the Hyderabad Cricket Association is. 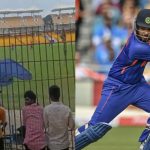