Shubman Gill played an outstanding knock of 208 runs in just 149 balls in the ongoing first ODI against New Zealand at Rajiv Gandhi International Stadium in Hyderabad.

Gill looked in fine touch right from the start of the innings. While wickets were falling at one end, the Indian opener looked unfazed and was no mood to get out cheaply.

He stitched a 60-run opening partnership with Rohit Sharma (34) before the latter, once again, threw his wicket away. Virat Kohli (8) had a rare cheap outing with the bat, while Ishan Kishan (5) couldn’t step up with the bat in the middle order.

Gill, however, ensured runs kept coming at the other end. Suryakumar Yadav (31) and Hardik Pandya (28) gave him company with handy contributions but both of them got out at crucial stages in the game.

Shubman Gill, though, kept the scoreboard ticking and notched boundaries despite the fall of wickets. Gill smashed three six to Lockie Ferguson in a single over to reach his maiden double-ton in ODIs.

With that, he also became the youngest batter-ever to score a double-century in the limited-overs format. He also became the fifth Indian batter to accomplish the feat after Sachin Tendulkar, Virender Sehwag, Rohit Sharma, and Ishan Kishan.

Meanwhile, the fans came up with numerous memes to celebrate Gill’s top-class innings. Here’s a look at some of those:

Sachin Tendulkar appreciating #ShubmanGill for 200 runs and suddenly realised about his records pic.twitter.com/SMM2skIpAz

Following his knock, Daryl Mitchell lauded Gill while reflecting on India’s innings. Here’s what he had to say:

“Gill batted pretty special to get them to 349. At the same time, we need to set a good platform, take the game deep and you never know what could happen. That was a special innings from Shubman, double century in one-dayers is pretty special.”

At the time of writing, New Zealand have managed to score 187 for the loss of 6 wickets in pursuit of the target. Mitchell Santner (27) and Bracewell (42) are currently unbeaten at the crease. 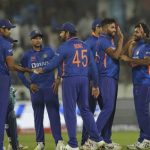