The star and celebrated Indo-Pak couple of former Indian tennis stars Sania Mirza and Shoaib Malik are constantly hitting the headlines of social media for the last couple of days. The duo is reported to file a divorce soon with each other. It all started with some cryptic Instagram stories from Sania Mirza just a few days back.

“The moments that get me through the hardest days,” read the caption of the cryptic Instagram story posted by the former Indian right-handed tennis veteran. Later on, Sania ignited these rumors a bit more with another story on her Instagram handle with the caption, “Where do broken hearts go?”

The users on the internet also speculated that the reported separation between Sania and Shoaib may be due to the alleged affairs between the former Pakistan skipper and star Pak singer Ayesha Omar. The speculations were based on a bold photoshoot last year that involved both Malik and Omar together in a single frame.

Meanwhile, in another surprising line of events, a news report has learned that the duo will feature in a Pakistan-based reality show on Urduflix. The news surfaced following a post from Urduflix’s official Instagram featuring Shoaib Malik and Sania Mirza together. A show named “The Mirza Malik show” is scheduled to be aired on Urduflix very soon.

The fans on social media are calling it a ‘publicity stunt’ by the former Pakistan skipper and the 35-year-old former Indian tennis prodigy.

Recently, the Sialkot-born cricketer appeared in a show “The Pavilion” on A Sports where he was analysing the recently concluded 20-20 World Cup 2022. The show also featured three other former Pakistan legends including the likes of Misbah ul Haq, Wasim Akram, and Waqar Younis.

Coming back to Sania-Shoaib, they’ve been married to each other for the last 12 years since 2010. They also have a four-year-old son Izhan. 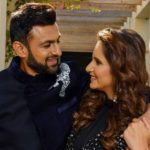