Babar Azam-led Pakistan locked horns with England in the final of the 20-20 World Cup 2022. The men in green batted first after losing the toss and they could manage to post a total of only 137 runs for the loss of eight wickets in the allotted 20 overs. Whereas the three lions chased down this target in 19 overs for the loss of five wickets.

Everybody in the entire cricketing fraternity is discussing Shaheen Afridi’s injury as about the turning point for the men in green in the all-important title clash against England.  It all happened in the 13th over of England’s innings when the 22-year-old injured himself while catching England’s Harry Brook.

Although, the Pakistan fans were extremely disheartened following their team’s defeat in the title clash of the most coveted tournament. A fan went to the extent of using cursing remarks for Shaheen Afridi.

“Runaway Shaheen you should have bowled five more balls but you ran away from the ground. No bigger event can happen than this. It was better that your body came from the ground,” tweeted a fan in Urdu while expressing his agony over Shaheen’s exit from the field before completing his quota of overs. These comments on Shaheen Afridi from a fan didn’t go down well with the former legendary Pakistan pacer Wasim Akram. The 1992 World Cup winner bowler took no time in releasing his anger over the fan following the latter’s disgraceful and disrespectful remarks for the ace Pakistan speedster.

Here’s the video of Wasim Akram replying to the question from that guy:

“Agar tumhein tameez nahi hai na chote bade ki. Apne player ko tum battameezi kar rahe ho. Koi sharam, koi haya nahi hai. (You don’t have the manners to respect your elders. You are speaking rubbish about your own player. Absolutely no shame and no regret.)”Just have a look at what he said about Shaheen Afridi. I’m fuming. I wish ki Tu mere saamne hota. (I wish you were in front of me),” said furious Wasim Akram in response to fan’s comment. 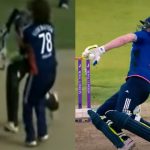