After a win in any major international tournament, there come the moments for a team and the players of the champion team that happen to be memorable for years. A similar is in the case for the Indian cricketers and the Indian fans when India won the inaugural edition of the 20-20 World Cup played in South Africa in 2007 followed by the men in blue’s winning campaign in the ODI World Cup of 2011.

The World Cup win of 2011 ended the 28-year-long wait of the Indian cricket team and fans to enjoy the moment of being the World Champions.

The winning night at the Wankhede Stadium of Mumbai was filled with ecstasy and joyful celebrations for the Indian team. Notably, it was also the last appearance of former legendary Indian batter Sachin Tendulkar.

Meanwhile, there was one more thing that went unnoticed then at the moment during the Indian team’s celebrations after winning the 2011 World Cup. But now, the clip of that particular moment has gone viral on social media after a Twitter user shared it on Tuesday.

In the video, the then-young Indian players Virat Kohli and Suresh Raina with celebrating the World Cup trophy during the victory lap of the Indian team. Subsequently, as is visible in the video, they deliberately went on to hit a man on his head. Notably, that individual was walking next to Virat Kohli and Raina.

The video of this incident between Raina and Kohli has left the fans angry with the former Indian southpaw Suresh Raina. Fans lashed out at him for doing unruly behavior on the field.

Here’s how fans lashed out at Suresh Raina after the video goes viral:

What’s funny in this? Shamefull act!

Kya chutiyapa he. Shame on you guys

Wat nonsense is this @imVkohli @ImRaina

Kohli wasn’t hitting the man it was Raina who was deliberately hiting the old man.. Shameful act

Talking about both the cricketers, Suresh Raina hung his boots from international cricket two years back in 2020 on the same day of 15th of August when former Indian skipper MS Dhoni announced his retirement. On the other hand, Virat Kohli has finished as the highest run-scorer in the recently concluded 20-20 World Cup 2022 with 296 runs to his name in six innings with an average of 98.96 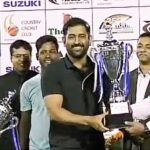