The whole cricketing world is currently bowing down to the historic achievement of two modern-day greats Babar Azam and Mohammad Rizwan. Both star Pakistani batters are in all the headlines of the cricketing world. Pakistan was locking horns with England in the second of the seven-match home T20I series. Both teams played this match at the National Stadium of Karachi.

Batting first, England posted a target of 200 runs for the Pakistani team in 20 overs. While chasing the target, the opening pair of Babar Azam and Mohammad Rizwan ripped off the English bowling attack. They both stitched a historic unbeaten partnership of 203 runs to win the match by 10 wickets.

The pair has also silenced the critics including the likes of Aaqib Javed after this swashbuckling performance. In the same sequence, star Pakistani speedster Shaheen Shah Afridi also took to Twitter for taking a jibe at the critics who were questioning the ability of Babar and Rizwan.

“I think it is time to get rid of Kaptaan @babarazam258 and @iMRizwanPak. Itne selfish players. Agar sahi se khelte to match 15 overs me finish hojana chahye tha. Ye akhri over tak le gaye. Let’s make this a movement. Nahi? (Such selfish players. They could have won this game in 15 overs if they had played well, but instead, they extended it till the very last over,” reads the tweet posted by Shaheen from his official Twitter handle.

I think it is time to get rid of Kaptaan @babarazam258 and @iMRizwanPak. Itne selfish players. Agar sahi se khelte to match 15 overs me finish hojana chahye tha. Ye akhri over tak le gaye. Let's make this a movement. Nahi? 😉

Just after the tweet from Afridi, fans took no time in appreciating the witty sense of humor of the young pacer. They also slammed the analysts who were putting the batting ability of Mohammad Rizwan and Babar Azam under the scanner.

My boii was not even in the squad or playing eleven today but yet he bowled a yorker and those snakes and trollers are GONE SURELY GONE
Sheenuuuuuu I'm crying 😭😭😭🤌🏼 https://t.co/aLQwXdJomV

BOWLED his own coach https://t.co/mKjaGvDzdk 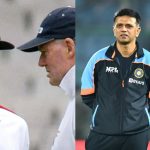