Vishnu Solanki recently grabbed the headlines for his commitment. Despite losing his newborn baby, he went on to play a first-class game just a few days after the tragic incident. As a matter of fact, he scored a hundred in that match as well.

It was against Chandigarh during the ongoing Ranji Trophy. Several people applauded his grit and courage. However, on the final day of the match, i.e. on Sunday, Solanki lost his father. The 29-year-old got a call from the manager to come inside and was given the news.

His ailing father, who has been battling severe illness passed away at a hospital in his home town, and this was the second family member he lost in just a matter of two weeks. The batter attended his father’s funeral only through a video call. A Baroda Cricket Association (BCA) official recently stated that there was no pressure on him to resume playing after his daughter’s demise.

“Vishnu had the option of not returning after his daughter’s death but the team man that he is, he didn’t want to leave his team in the lurch. That’s what makes him a special human being,” said the official, as quoted by My Khel. It is to be noted that Solanki’s knock gained a lot of appreciation by one and all.

As far as Baroda’s game against Chandigarh is concerned, the game turned out to be a draw. After being asked to bat first, the Vohra-led side got to 168 in the first innings. In reply, the Devdhar-led side scored 517, where Solanki scored 104.

Post which, Chandigarh scored 473-7 in the third innings. Currently, Baroda is placed third in the points table in Elite Group B, and has lost 1 and drawn 1 match so far. Their next game is against Hyderabad. 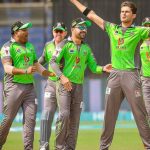