MS Dhoni, the former Indian cricketer and team India captain, is one of the fittest cricketers India has ever seen, and the only player to stand next to him would be India’s veteran batter, Virat Kohli. The duo proved their worth when they played together in the 2019 50-over World Cup and the running between the wickets is a sight to behold.

Although the player is no more a part of international and competitive cricket, Dhoni still sets the bar higher and higher with his fitness and never-ending cravings for various sports. The talented batter won a tennis championship in Jharkhand and hit the headlines yet again for his incredible athleticism.

Winning the JSCA Tennis Championship after playing the doubles round alongside Sumeet Kumar Bajaj, a tennis player hailing from the same state, Dhoni proved his worth yet again and the fans, on the other hand, could not keep calm without buzzing about it.

Is MS Dhoni coming back to the Indian cricket team?

Post India’s dismal exit in the recently concluded 20-20 World Cup 2022, reports emerged claiming that the 2011 World Cup-winning captain might get back to the Indian team in some capacity and reduce the burden of head coach Rahul Dravid.

To add more to it, the Indian team played under the mentorship of the former wicketkeeper in the 20-20 World Cup 2021, albeit they played even worse than the 2022 edition, as they crashed out of the tournament in the group stage.

It remains to see if the Ranchi-born would make a comeback as the mentor of the Indian team in the near future but ahead of it, he will have to turn things around for the Chennai team in the upcoming Indian T20 League post their sepulchral outing in 2021.

With the Chennai franchise yet to find an alternative for the leadership, Dhoni’s outing in 2023 might be the last time fans could witness him on the field, while it is highly likely that the cricketer might bid goodbye to all forms of cricket after playing in Chepauk for one last time.

As things stand, let us take a look at a few Twitter reactions for Dhoni’s achievement with the tennis racket:

When he will stop his trophy collection 😂

He is so fit 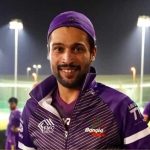