Apart from Jos Buttler, who played a brisk knock of 49 in 35 balls, none of the batsmen could resist the Chennai bowlers as Rajasthan could only manage 143-9 in their 20 overs, losing the game by 45 runs. Moeen Ali and Ravindra Jadeja spun a web around the Rajasthan batting and shared 5 wickets between them. For Rajasthan, this is their second loss in three games. At the moment, their batting looks too vulnerable.

Earlier, Rajasthan Royals won the toss and opted to bowl. This was the most obvious call as barring one game, all the matches on this venue were won by the teams chasing. The bowlers started well and didn’t allow the CSK openers to break free. Ruturaj Gaikwad once again failed to impress and departed for 10. Du Plessis looked fluent but couldn’t stretch his inning beyond 33.

Almost every batsman from Chennai made important contribution. However, none of the batsmen played any significant knock. Despite that, Chennai Super Kings were able to post a decent 188. However, they’ll have to look at this and would need someone from the top order to play through the innings. Chetan Sakariya was the pick of the bowlers from Rajasthan Royals and returned with figures of 3-36.

Here are the best reactions from the game.

Well done #csk on winning the game specially defending the total at wankhede. Change of ball was the turning point ?

CSK having the best Net Run Rate in IPL 2021. They've moved to No.2 position on the Points Table.

When butler hit jadeja for a six and then ball was replaced , you could hear dhoni on the stump mic saying that the ball will turn because it’s dry … that’s exactly what happened !! #ipl2021 #csk

He may not have the power like he used to with the Bat MSD,but he is still the best T20 tactician we have ever seen … #IPL @ChennaiIPL 👍

The ball just loves Jadeja so much today. Gifts him two wickets and also goes to him wherever he is fielding. So much love. #CSKvRR

CSK's highest score in match was 33 while RR's 49. Yet, Dhoni's team won by a massive margin. They playing like old CSK, as a unit.#CSKvRR #RRvCSK

Also read why Sanju Samson left his teammates in splits 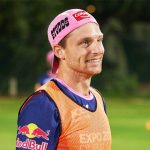