Having won the T20I series by 2-1 margin, India and England clashed again in the first ODI on Tuesday, July 12th. To say that it was total domination by the Men in blue would be a massive understatement.

Having won the toss, Rohit Sharma elected to bowl first seeing the grass on the pitch. Indian bowling led by Jasprit Bumrah was on the top from the word get-go. Jason Roy was bowled on a peach of a delivery by Bumrah and since then wickets of English batters continued to fall like autumn leaves.

Joe Root, who has been in incredible form in the Test Cricket, was dismissed by Mohammad Shami on his second ball itself. Jonny Bairstow, another inform batter was sent packing by Bumrah in the third over. Watching the fall of wickets at an incredible pace, England’s Test captain Ben Stokes was promoted up the order to counter the Indian charge, but it was all in vain.

Shami dismissed Stokes as well on the very first ball. England’s score was 17-4 at one point and it did not get better as the game moved further. The whole English team was sent packing at 110, with Jasprit Bumrah taking 6 for 19.

This was the first instance when Indian pacers took all of 10 wickets while chasing in the history of Indian cricket. Individually, Bumrah came up with the fourth-best ODI figure in England ever.

Coming on to chase this small target seemed too easy for the Indian openers Rohit Sharma and the returnee Shikhar Dhawan. The Indian captain came up with a sensational 76* off of 58 balls with six boundaries and five massive sixes. Dhawan also came good on his return to ODIs with a 31*. In the end, India obliterated England and won the match by a massive 10 wickets.

Twitter came alive with a dominating win and had a field day with memes and tweets. Let’s look at some of them.

Hey @benstokes38 you wanted to chase 450 right?
Now can you please make at least 200 in the next ODI so that we can watch our batsmen smack your bowling a bit longer? 😁🇮🇳👊#IndvEng #IndvsEng

comfortable win for india with more than an over to spare…oh wait..#ENGvIND

3 ducks in a single innings
We ain't England, We are Duckland😍.#INDvsENG

A day England will want to forget quickly 😱 pic.twitter.com/XNZONhy0HX

Chased down with minimum fuss 💪🏼

A dominant performance from #TeamIndia, with captain Ro leading from the front with 7️⃣6⃣* 🙌🏼 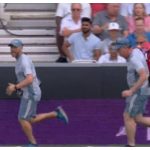