Former legendary Indian batter Sachin Tendulkar’s son and young cricketer Arjun Tendulkar have moved to Goa from Mumbai to find a better opportunity for him. He is currently struggling to confirm his place in the squad of Mumbai due to the tough competition in the cricketing scenario in Mumbai.

The 22-year-old made his first domestic appearance for Mumbai last year but since then he could play only two T20 matches and scalped only two wickets. He was also a part of the five-time Indian T20 League champions Mumbai but still, his debut is awaited in the league.

Sachin was aware of the fact that it would be tough for his son to break into the squad of Mumbai amidst the tough competition. So, keeping that in mind, he has decided to move him to Goa, the state close to Mumbai.

Here’s how fans reacted to Sachin’s move for his son:

Yograj is a crazy half wit ! Sachin Tendulkar has lost it and has gone desperate !

He is a Cruel Person and Very Strict even for Yuvi He Directly Blame Everyone and Now he is training Arjun 🤯🤯🤯🤯 https://t.co/8XNiBRUCuh

👀 he was very strict to Yuvraj I've heard who was his own son.. what will he do to Arjun 💀 https://t.co/z24cacP4II

Trust me I know people gonna take it in Sarcastic way but if someone wants to get his discipline and focus back on game, NO BETTER PERSON then YOGRAJ SINGH real HARD Task Master https://t.co/oUfmGHmpwc

“Getting maximum game time on the ground is important for Arjun at this juncture of his career. We believe that the shift will improve the probability of Arjun featuring in more competitive matches. He is embarking on a new phase of his cricketing career,” said Sachin Tendulkar as quoted by CricBuzz.

Speaking of Sachin, then he is currently in action during the Road Safety World Series as the captain of India Legends. Indians have defeated England Legends in the recent match played in the tournament. 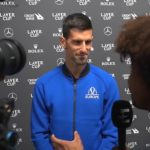