Shubman Gill is one of India’s future stars and the player has been a part of the ODI and Test setup. The young opener outclassed everyone in the ODI series against West Indies and Zimbabwe. He further vindicated the opinion by winning the player of the series award in the Caribbean.

Cricket players are also great fans of Premier League and La Liga football clubs. It is well known that Virat Kohli is a great fan of Manchester City. Rohit Sharma is a great fan of the Real Madrid club and many such players follow football closely including former captain MS Dhoni.

Shubman Gill caught the eyes of Indian fans at Stamford Bridge on Wednesday (September 14) as he attended the Chelsea match. The Blue team faced Salzburg at Stamford and the match ended in a draw with a score line of 1-1.

Fans started to troll the young Indian batter asking if anyone had come with him. This is not the first time that Shubman Gill has caught the limelight on social media. It all started with break-up rifts with Sara Tendulkar, the daughter of Sachin Tendulkar.

It was reported earlier that the player was dating Sara Tendulkar but the duo never opened up on it publicly. Fans speculated that all might not be okay with the duo as they unfollowed each other on social media. However, in a few days, he was spotted with Bollywood actress Sara Ali Khan.

Shubman Gill made it to the headlines yet again after going to a restaurant with the actress. Fans slammed the youngster saying it was not the ‘Sara’ that he dated earlier. People speculated that the duo might have started dating each other while a few assumed that this might be the reason behind the breakup with Sara Tendulkar.

Fans have now reacted to the player attending the Chelsea game and a few even asked if Sara Ali Khan was with him in the stadium. Here are a few funny tweets that we handpicked for you:

No wonder they didn't win

reason behind their draw(~LOSS) against SALZBURG

Only makes sense they drew and still are last

And they bottled the win 👀 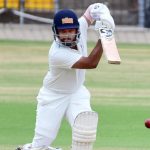