Sri Lanka has now become the third team in the Asia Cup 2022 to reach the super four round of the tournament. They have beaten Bangladesh in their second match of the group stage in the tournament. Batting first, Bangladesh posted a total of 183 runs for the loss of seven wickets in the allotted 20 overs.

The cricket fans have also come up with their creative minds after Sri Lanka’s win against Bangladesh. They posted various funny memes on Twitter. The memes were also funny because of the war of words that arouse between the managements of both the teams just before the commencement of the match.

Here’re the memes fans posted after the defeat of Bangladesh:

Recalled this meme after the result of tonight's #BANvSL match …. 😂😂😂 pic.twitter.com/xXMy1ZZIwi

Discussing the match furthermore, then Bangladesh couldn’t have a good start as they lost their first wicket only on the score of 19 runs in the form of Shabbir Rahman. Opening batter Mehidy Hasan Miraz scored 38 runs off 26 balls with two boundaries and two sixes to his name.

Other than Mehidy, middle-order batter Atif Hussain also played a fine knock of 39 runs off just 22 balls with four boundaries and two sixes on his credit. With the help of these knocks, Bangladesh managed to post a total of 183 runs for the loss of seven wickets in the 20 overs.

While chasing the target, openers Pathum Nissanka and Kusal Mendis provided a good start to Sri Lanka. They both made an opening partnership of 45 runs in 5.3 overs. Kusal Mendis ended up as the highest-run scorer in the inning for Sri Lanka. He played an amazing knock of 60 runs off 37 balls with four boundaries and three sixes to his name.

Other than Mehidy, skipper Dasun Shanaka also played a match-winning knock of 45 runs off 33 balls with three boundaries and two sixes to his name. Finally, Sri Lanka crossed the line in this nail-biting thriller by a margin of two wickets.

Now, Sri Lanka and Afghanistan have qualified for the super four round of the Asia Cup 2022. 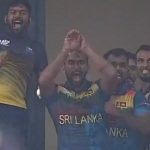