Mumbai pacer Arjun Tendulkar was recently featured on English cricketer Danielle Wyatt’s Instagram story on Tuesday. She shared a photo of them having lunch at Soho in London. Wyatt has been in touch with Arjun for a long time now, and both have been previously spotted together in the past as well.

The 22-year-old all-rounder is currently in London and will be part of Mumbai’s three-week exposure trip to the UK for their uncapped Indian players next month. He was part of their recently concluded Indian T20 League 2022 campaign but failed to make an appearance.

The 31-year-old all-rounder has featured in 93 ODIs and 124 T20Is matches for England. She made the headlines in 2014 when she asked her favourite player, Virat Kohli, to marry her. She has previously posted pictures with Kohli and Arjun as well.

Wyatt previously shared a memory of how she met Arjun for the first time. Wyatt said she used to bowl then 10-year-old Arjun in the nets, who was part of MCC youngsters at Lord’s Cricket Ground. She described Arjun as being so small when she first met him but also praised the Indian youngster for his quick deliveries.

“So, I first met Sachin and Arjun at Lord’s Cricket Ground. Maybe 2009 or 2010 when I was with MCC young cricketers and they were training in the nets. Literally I went to the nets and said hello and introduced myself saying I am Danni etc. Arjun would have been 10 years old back then, he was so small. There is a photo somewhere on Google. I bowled to him that day, he was very good. Since then whenever I bump into Sachin or Arjun or whenever they come to Lord’s to train, I go to the nets and ask him (Arjun) to bowl the new ball to me,” Wyatt stated earlier.

“But he is getting very quick now. He always says I will bounce you and knock your head off so I don’t like him bowling to me anymore. He is getting too dangerous to face (Laughs). They are a lovely family. Arjun’s mom is also lovely. Recently, I bumped into Sachin in Australia during the World Cup. It is nice to see them whenever I see them,” she added. 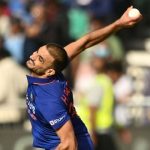