The Indian Cricket Board have announced India’s squad for the two-match T20 internationals against Ireland. While most of the senior players are in England, Hardik Pandya has been given the role to lead the side. Indian pacer, Bhuvneshwar Kumar will assume the vice-captaincy duties.

Star batters, Suryakumar Yadav and Sanju Samson make their return to the team, while Hyderabad’s batter, Rahul Tripathi has received his maiden India call-up. Young pacers such as Umran Malik and Arshdeep Singh haven’t got the chance to represent in India in the ongoing T20 series against South Africa. The duo has been retained in the squad as well.

Amidst all the selections, there were some players who were unlucky to not have made the cut. In this article, we will be taking a look at three players who have been unlucky to miss out on the Ireland tour.

Rahul Tewatia has been showcasing his mettle for the last few overs in the Indian T20 League 2022. He is a handy spinner and has an incredible ability to finish games. This season, Tewatia played for Gujarat and helped the team win a few games with his finishing abilities. In 16 matches, he managed to score 217 run at a strike rate off close to 150. However, despite his valuable contributions, the management has overlooked his services for the tour. 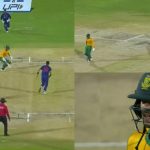