Bangalore put in a sensational performance against Lucknow in the Eliminator clash on Tuesday at Eden Gardens Stadium. Faf du Plessis and Co. beat Lucknow by 14 runs in a do-or-die contest to book their place for the Qualifier 2 match, scheduled to be played on Friday.

Bangalore batted first and notched a huge score of 207 runs on the board in the first innings. Veteran batters, namely Virat Kohli and Faf du Plessis both failed to hit the straps. Faf du Plessis got out on the very first ball he faced off Mohsin Khan.

Virat Kohli hit 2 fours during his 24-ball 25 but never looked comfortable in the middle. However, Rajat Paditar ensured runs came at a good rate. Coming in at number three, Patidar stayed at the crease right till the end.

While wickets were falling at one end, Patidar kept hitting boundaries all around the ground. He went on to reach his century in just 49 balls. The young batter stitched a sensational 92-run partnership with Dinesh Karthik for the 5th wicket and took the team to a mammoth score on the board.

Dinesh Karthik, once again, lived up to the expectations as he played an unbeaten knock of 37 runs in 23 balls. Rajat Patidar, on the other hand, remained unbeaten on 112 off 54 balls, including 12 fours and 7 sixes.

For Lucknow, Mohsin Khan, once again, was sensational with the ball. He returned with impressive figures of 1 for 25 in 4 overs. However, the likes of Avesh Khan (1 for 44), Ravi Bishnoi (1 for 45) and Chameera (0 for 54) proved expensive.

Chasing a mammoth score, Lucknow got off to a poor start as they had lost Quinton de Kock in the very first over of the innings. Manan Vohra (19 off 11) counter-attacked with two sixes and a four before getting out off Harshal Patel in the 5th over. Despite losing two wickets, Lucknow had managed to score 62 runs at the end of the power play.

Hasaranga then put the brakes on Lucknow as he delivered two sensational overs. KL Rahul and Deepak Hooda found it hard to fetch boundaries in the next six overs. At the end of 10 overs, Lucknow had managed to score 89 for the loss of 2 wickets. KL Rahul couldn’t score boundaries in the middle overs and completed his half-century off 43 balls.

Deepak Hooda, however, on the other end, tried to change the momentum with three sixes after the 13th over. However, Hasaranga had him bowled in the 15th over to turn the pressure back on Lucknow.

KL Rahul changed gears after Hooda got out as he smashed boundaries in short intervals. The game was evenly poised till the 17th over of the innings. Lucknow were 167 for 3 and needed 41 runs in the final 3 overs. Harshal Patel, once again, delivered in the death overs as he gave just 8 runs and also picked the wicket of Marcus Stoinis in the 18th over of the innings.

Hazlewood then produced a brilliant 19th over as he conceded 9 runs and picked two wickets,. including KL Rahul. Those two overs turned the game around for Bangalore as Lucknow fell 14 runs short in the end.

With that defeat, Lucknow have been knocked out of the tournament, while Bangalore will play their Qualifier 2 against Rajasthan on Friday.

Here’s a look at the top 10 memes from the match:

Gambir in dressing room to all fielders of LSG today #LSGvRCB pic.twitter.com/jRaJA1MmjE

Following RCB not for the faint hearted #LSGvRCB #IPL2022 pic.twitter.com/rkOSjsg8na

What an amazing fifty in 43 balls while chasing 208😱
KL Rahul being one of the most consistent performer for "40s ball fifty department"🔥🔥 #LSGvRCB pic.twitter.com/ZjZhsSeyBg

Gautam Gambhir to KL Rahul after the match. #RCBvsLSG pic.twitter.com/XU1SzVFgEv

Gautam Gambhir throughout the match. pic.twitter.com/YB1ynqLj5V

Krunal Pandya angry at Gautam Gambhir for including him in playing XI pic.twitter.com/iLCUvnd2Ib

Gautam Gambhir fighting with his own teammates after eliminating KKR pic.twitter.com/hJfCoFi5ZY

RCB win is good, but the look of defeat on Gautam Gambhir's face? Absolutely priceless. 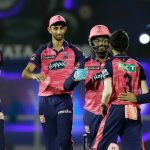