WWE Superstar Gunther has been in the headlines of the wrestling universe for his amazing fights of late against big names like Braun Strowman. He also clinched the intercontinental championship recently and also defended it on several occasions. He is being dubbed as one of the most dangerous unarmed fighters in the WWE universe.

Most recently, Gunther has got a new fan in the form of a renowned Bollywood actor and host of the WWE Super Dhamaal show, none other than Sharman Joshi. In a recent interview with Sportskeeda, Joshi revealed that he is very keen to work with Gunther in the next movie.

“Gunther only. With his fan following and all, it’ll help my movie. Plus, the fact that I’m his fan serves all purposes,” said the 3 Idiots fame actor to Sportskeeda.

He got what it takes, obviously – Sharman Joshi on Gunther

“The fact that he’s the reigning champion (Intercontinental) right now. He got what it takes, obviously,” he added later.

Later on, the actor also talked about his upcoming projects. He also opened up about his own production venture, his new upcoming Gujarati movie Congratulations which is set to be released in the theatres on the 3rd of February.

“I have six projects lined up. God has been kind, some really exciting work I have done. And my first production is also up for release on February 3rd. It’s a Gujarati production called Congratulations. Apart from that, there’s a web show called Kafas; there’s a web movie called Penthouse. And there are a couple of feature films. One is an adaptation of Sound of Music. Not an adaptation, but we have brought the rights to the adaptation. It’s inspired from there,” said Joshi further in the interview. 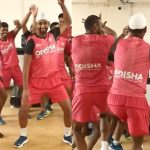