India secured their 2nd win against South Africa on Friday to level the five-match series 2-2, with one game left to be played. After being asked to bat first, India made a horrible start. The likes of Ruturaj Gaikwad and Iyer got out in single digits, while Ishan Kishan struggled his way to 27 off 26 balls.

Skipper, Rishabh Pant, once again, failed to live up to the expectations and, at one stage, India were in dire straits at 81 for 4 in 13 overs. However, the arrival of Dinesh Karthik changed things dramatically. Hardik Pandya and Dinesh Karthik stitched a game-turning partnership for the fifth wicket, helping the team reach a competitive score of 169 runs on a two-pace wicket.

For India, Dinesh Karthik starred with the bat, scoring 55 runs in 27 balls, while Hardik Pandya, once again, played a handy knock of 46 runs in 31 deliveries. South Africa needed a solid start to chase down the score.

Quinton de Kock was back into the side and they would have backed themselves in the run-chase. However, India bowlers were right on the money in the power play.

Bhuvneshwar Kumar and Avesh Khan were brilliant at the start of the second innings. South Africa skipper, Temba Bavuma was sent back retired hurt, however, wicket of Quinton de Kock left South Africa in all sorts of trouble.

Quinton de Kock could have turned the game around for Proteas but he, unfortunately, got run-out in the 5th over of the second innings. Harshal Patel bowled de Kock on his pads and the South African ducked the ball and went running for a single. However, Dwaine Pretorious, on the other hand, backed out after running for a single.

By the time Pretorius decided to not go for the run, De Kock was already too far down and Harshal Patel was quick to gather the ball and run De Kock out. The South African southpaw got out after scoring 14 off 13 balls.

You can see the video here:

Wickets kept falling at short intervals, thereafter, and South Africa were bundled out for just 87 runs. The fifth and the final T20 international is slated to be played at M. Chinnaswamy Stadium on Sunday. 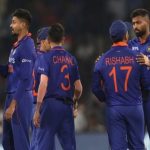