Indian women kept India’s medal hopes alive in the ongoing Tokyo Olympics as Boxer Pooja Rani moved into the quarter-finals while shuttler PV Sindhu and Archer Deepika Kumari made it through to the pre-quarterfinals. Sindhu defeated Hong Kong’s Cheung Ngan Yi 21-9, 21-16 in the final Group J match. The world number 7 shuttler will take on Denmark’s world number 12 Mia Blichfeldt tomorrow. In Men’s Singles, B. Sai Praneeth lost to Mark Caljouw of the Netherlands 21-11,14-11 in a Group ‘D’match.

In Boxing, Pooja Rani defeated Ichrak Chaib of Algeria in Round of 16 women’s middleweight. Archer Deepika Kumari entered the pre-quarterfinal in the women’s category by defeating Mucino-Fernandez Jennifer of USA 6-4 in the round of 16. Earlier she won in the elimination round of 32 defeating Karma of Bhutan 6-0.

In Archery, Tarundeep Rai lost 5-6 to Itay Shanny of Israel. Earlier, Tarundeep had defeated Ukraine’s Oleksii Hunbin 6-4 in the Round of 32.

In Rowing, the duo of Arjun Lal Jat and Arvind Singh bowed out of the competition after finishing sixth in the second semifinal. In Women’s hockey, Great Britain thrashed India 1-4 in their Pool Agame. This was India’s second loss after a 5-1 defeat to the Netherlands. Indian team will next take on Ireland on Friday.

Tomorrow, Indian boxer Mary Kom will take on Columbia’s Valencia Victoria in Women’s 49-kilogram category while in Men’s Superheavy category Satish Kumar will take on Jamaica’s Brown Recordo for the round of 16. Shooters Manu Bhakar and Rahi Sarnobat will take part in 25 meter pistol qualification precision round while golfer Anirban Lahiri will participate in the first round of qualification. 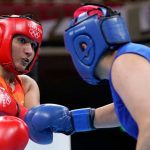 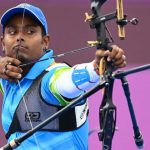