The 35-year-old senior Argentine right winger Lionel Messi is once again in the headlines of social media for a reason not from the game itself. The senior lad dominating the arena for the last 17 years since his debut in the international circuit. Currently, Messi is in action during the World Cup warm-up matches.

Argentina locked horns in their penultimate warm-up game against Jamaica. The South American veterans easily won the match against the Jamaicans with a handsome score line of 3-0.

Although, the match has attracted the headlines for another reason apart from the action of the game. It happened when a fan invaded into the ground with a bare back to get an autograph from the legendary footballer none other than Messi. The fan entered the field with a marker on his end.

After coming in front of Messi, the fan immediately gave the marker to Messi’s hands and the latter was very well aware of what he was supposed to do with the marker. He took no time in signing at the back of the fan. But till the time, Messi could complete his autograph, the security personnel tackled the fan with an immediate effect, it also made Messi hold himself amidst the chaos.

The video of this moment has gone viral over social media within minutes of being shared by a Twitter user. Later on, the fan was taken out of the ground and probable he’d been debarred from the next matches to watch.

Speaking of the match, then the Messi himself scored two goals alongside one from Julian Alvarez in the 14th minute of the game. Notably, the Argentine side and the veteran right winger are gearing up for the upcoming FIFA World Cup 2022 commencing on the 20th of November in Qatar. 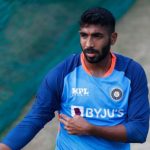