Romelu Lukaku has brushed aside his comparisons with legendary footballer Cristiano Ronaldo. Both players clashed in the Serie A 2020-21 where Ronaldo edged ahead, scoring 29 league goals while Lukaku managed 24 goals for Inter Milan.

Speaking about his comparisons with Ronaldo, Lukaku termed Ronaldo as one of the greatest footballers in the history and said there is no comparison between him and the 36-year-old.

“I’m not going to rank him from first to third but he’s in there.

After a stiff fight for the golden boot in Serie A, both players will clash in Premier League this season. Ronaldo will play for Manchester United after a sensational move from Juventus. Lukaku, on the other hand, emerged as Chelsea’s prime transfer target after their failed pursuit of Erling Haaland, and returned to the club after seven years.

“When Chelsea made their third offer I knew it was serious and I was no longer with my head in Milan. Chelsea offered €110m plus Zappacosta, but Inter said no. So I told Inzaghi: Inter pulled me out of s*** but I wanna leave only because of Chelsea”

Lukaku is already on board in the Premier League, having scored against Arsenal last month. Ronaldo is yet to feature for Manchester United but is likely to do so against Newcastle United next week at Old Trafford. 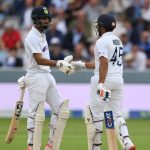