The first quarter-final of the ongoing FIFA World Cup took place on 9 December 2022. Brazil locked horns with Croatia in the Education City Stadium. In the Round of 16, Brazil defeated South Korea by 4-1. Meanwhile, Croatia managed a tough win over Japan after defeating them in a penalty shootout.

So, fans were hoping for a great match between these two great sides. In the last match, Neymar made a comeback from his ankle injury. However, he played an instrumental role in that 4-1 victory over South Korea. So, it was another big test for Neymar and his men against a quality side like Croatia.

Both teams started the game evenly as no such clear chances were created in the opening 10 minutes. In the 13th minute, Ivan Perisic had a shot but his effort went wide of the left post. After that, Vinicius Jr. had a chance to give a lead to Brazil. But, Croatia’s Josko Gvardiol blocked that attempt to prevent him from scoring.

Then, in the 21st minute, Neymar tried to score from a tight angle. But, Dominik Livakovic saved that attempt with ease. After that, in the 30th minute, Perisic came up with a shot that went over the bar. Thus, the first half ended 0-0. In the second half, the Selecao started the game with more intensity. In the 48th minute, Livakovic managed a super save and prevented Gvardiol from scoring an own goal.

In the 55th minute, Livakovic denied Neymar once again with a strong boot. Then, in the 66th minute, Lucas Paqueta was very close to scoring the opener for the Selecao. But, again the goalkeeper of Croatia came up with an excellent save. However, Brazil created several chances but no goals were scored as the game ended 0-0 after 90 minutes. In the extra-time, Neymar scored the opener for Brazil in the 105+1′ minute. It was his 77th goal for the Selecao. Then, Croatia responded quickly as Bruno Petkovic scored the goal in the 116th minute. Thus, the game ended 1-1 after extra time. After that, in the penalty shootout, Croatia defeated Brazil 4-2 and qualified for the semi-final. 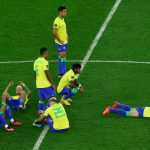