India skipper Sunil Chhetri is a rare legend in Indian Football. Not a lot of players have had huge recognition as the team is trying to find its footing at the Global level. Not to forget, Chhetri is the all-time third-highest goal scorer in international football. Meanwhile, FIFA has now honored the India skipper with a three-episode series on its official website.

Talking about the series, it starts with the journey of the world’s number 68 player. The series also highlights his teenage angst, personal and professional life, and the people who have supported him. The title of the series is ‘Kick Off | Captain Fantastic’. The title itself gives honor and recognition to the Bengaluru FC player. The World Football Governing body posted a photo of Chhetri with the likes of Cristiano Ronaldo and Lionel Messi.

The photo was captioned ‘You know all about Ronaldo and Messi, now get the definitive story of the third highest scoring active men’s international. @chetri_sunil11’s Captain Fantastic is available on FIFA+ now’.

The series was shot in Bangalore and Delhi

“Some of the parts have been shot in Bangalore as he is living there while a bit of shooting also took place in Delhi, where his parents live and where he grew up,” a source aware of the development was quoted as saying by The Times Of India.

“It’s part of FIFA’s regional content initiative which they have launched. So globally when one talks of Indian football, Sunil, without a doubt, is the contact point. You would go to him, right,” an Indian football insider added. 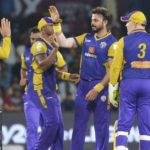