West Indies and Australia will step up their T20 World Cup preparations with a five-match T20I series starting July 10. Both teams haven’t played a T20I game since March 2014. The series will be an opportunity for them to fine-tune their combination ahead of the showpiece event in October- November. West Indies come into the series on the back of a 3-2 loss to South Africa. However, the series was evenly fought and could have gone either way. It was the poor form of their batsmen that led to West Indies’ downfall.

The hosts will have a full-strength squad at their disposal for the T20I series. Australia, on the other hand, will miss the services of Steve Smith, David Warner, Glenn Maxwell, Marcus Stoinis and Pat Cummins, who’ve pulled out of the tour. Still, the visitors have compiled a very strong squad that can give West Indies a run for their money. Here’s all you need to know before the T20I series

Both teams have been very competitive against each other with West Indies marginally ahead from Australia. As mentioned, this will be the first game between these two sides in over 7 years and a lot has changed since then.

Where To Watch West Indies vs Australia 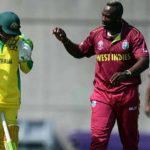