Former Australia skipper and batting superstar Steve Smith is enjoying the form of his life with the bat in the ongoing edition of the Big Bash League. He smashed another century in the BBL and that too unbeaten against the Sydney Thunders in the 50th match of the tournament at the Sydney Cricket Ground in Sydney.

Apart from his massive century, Smith made it to the headlines among cricket fans for one of his shots that went on to hit Sixers’ skipper Moises Henriques at the non-striker’s end. The video of this incident is also made rounds on social media as soon as shared on the official Twitter handle of the Big Bash League.

The incident happened on the third ball of the 18th over when Daniel Sams was bowling for Thunders. The latter happened to come up with a slower one to the centurion smith. It was also the time when he was batting on 112 runs off just 59 balls. The 32-year-old smashed it very hard but couldn’t time it very well and the shot went straight to his skipper Henriques at the non-striker’s end.

Although, Henriques succeeded in escaping the hit and reacted with a thumbs up after gaining the hit on his body.

Speaking of the match, the Sixers’ skipper won the flip of the coin and decided to bat first. Although they faced some early blows when Josh Phillipe and Kurtis Patterson went back to the pavilion on the team’s score of 32 runs in 4 overs. But it was the time when skipper Henriques took the charge with Steve Smith. Later, Smith went on to stun everyone with his outstanding unbeaten century of 125 runs off just 66 balls with five boundaries and nine sixes to his name.

While defending the target, Steve O’Keefe and Sean Abbott scalped 4 and 3 wickets respectively, and played a crucial role in bundling up Thunders only on the score of 62 runs in 14.4 overs. Eventually, Sixers won the match by 125 runs and Smith won the ‘player of the award for his match-defining knock. 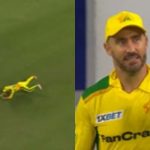