All the world-class players from around the world come together every year for two months to make the tournament a spectacle. Both the players and the Indian Cricket Board have benefited immensely from the tournament. The league has seen players getting bid for unbelievable amounts and become millionaires overnight.

Add to that, the Indian T20 League has also helped the nation unearth some outstanding Indian cricketers, over the years. Players such as Hardik Pandya, Jasprit Bumrah, Umran Khan, etc. have all come to the reckoning by performing in the cash-rich league.

Rajasthan are locking horns with Gujarat in the final on Sunday at Narendra Modi Stadium. The 15th edition will be completed on Sunday, however, the fans are disappointed with the fact that the Indian Cricket Board are yet to announce the start of the Women’s edition of the Indian T20 League.

Recently, the 2022 edition of the Women’s T20 Challenge was held in a space of 6 days. For the unversed, a total of 3 teams participate in the tournament, i.e., Supernovas, Velocity, and Trailblazers. However, a lot of cricket pundits and fans believe that the country has enough potential to conduct a full-fledged Indian T20 League tournament for women.

In the final of the Women’s T20 League 2022, a video was also surfaced on social media where the crowd could be seen chanting, “We want Women’s Indian T20 League.” You can see the video here.

Recently, the secretary of the Indian Cricket Board, Jay Shah took to his social media handle to give an insight on what the board thinks about the prospect of conduct a women’s edition of the Indian T20 League. According to him, the next edition of the Women’s T20 Challenge will be much bigger than this year.

“The quality of cricket one witnessed in Women’s T20 Challenge was truly remarkable with the best of Indian talent rubbing shoulders with the best in the world. The future is certainly promising and the next season will be much bigger. @ImHarmanpreet @BCCIWomen,” Shah wrote on Twitter.”

The quality of cricket one witnessed in Women's T20 Challenge was truly remarkable with the best of Indian talent rubbing shoulders with the best in the world. The future is certainly promising and the next season will be much bigger. @ImHarmanpreet @BCCIWomen pic.twitter.com/O18Ueg4U1C 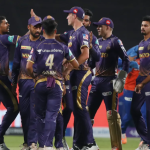