Australia outclassed arch-rivals England in all three departments during the latest Ashes 2021/22 series win Down Under. The Aussies dominated in the entire series and the result was a 4-0 win, with the fourth Test at the SCG ending in a stalemate.

After an emphatic Ashes series win, it was party time for the Australian players. However, what really stood out here is that Pat Cummins & Co. were seen having a gala time with the passionate supporters of the England cricket team ‘Barmy Army’.

In a video posted by batting superstar Steve Smith on his official Instagram handle, he and his Australian teammates were seen celebrating their Ashes series triumph with the Barmy Army. David Warner, Marnus Labuschagne, and others were seen enjoying some drinks and at the same time, were also singing ‘Sweet Caroline’.

Meanwhile, senior offie Nathan Lyon turned entertainer as he was heard singing ‘True Blue’ which left Test skipper Pat Cummins and assistant coach Andrew McDonald in splits. The video of the same was posted by opener Usman Khawaja on Instagram.

Coming back to the fifth Test match in Hobart, Mark Wood’s six wicket haul bundled Australia out for 155 as they set England a target of 271 runs to manage a consolation win.

In reply, Rory Burns (26) and Zak Crawley (36) added 68 runs for the opening stand and at one stage, it seemed as if England were cruising towards an easy win. Nonetheless, once the duo was dismissed, the Aussie bowlers staged a dramatic turnaround as the visitors ended up losing their next eight wickets for 58 runs, to be skittled out for 124. Thus, Australia registered an emphatic 146-run win.

Travis Head was adjudged the Man of the Match & Series for his outstanding batting performances. 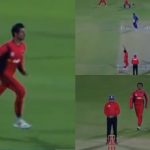 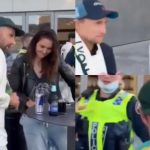