Former Indian batter Wasim Jaffer has taken a sly dig at the England team after their massive defeat by an inning and 12 runs in the first Test at Lord’s against the South African team. Actually, everybody in World cricket was appreciating the way Brendon McCullum and Ben Stokes transformed the pattern of batting in Test cricket.

The English team started doing wonders in the fourth innings of the game. Cricket experts and fans were in all praise of the pair and termed it as ‘Bazball’. But South African skipper, Dean Elgar had something different to say just before the start of the first Test match against England.

Recently, former veteran Indian cricketer Jaffer took a jibe on English for their fourth innings approach. Jaffer also went on to praise the intent of the South African team to destroy the Bazball effect of England.

“Bazball has done wonders in the fourth inns,   SA: There will be no fourth inns. #ENGvSA,” reads the tweet from Wasim Jaffer. Fans also reacted to in a funny manner to this tweet from the Jaffer.

"Bazball has done wonders in the fourth inns"

SA: There will be no fourth inns. #ENGvSA

Notably, it’s not the first time when Wasim Jaffer trolled the English team, there have been a few instances in the past when he had some funny banters with the former England skipper Michael Vaughan.

Coming back to England vs South Africa, then earlier, Dean Elgar, while talking about the contest against England said:

“With all due respect, I am really not going to entertain that (Bazball) anymore. We have chatted about it long and hard. I just want to crack on with the cricket,” Elgar said,”

“I think the game deserves that respect and mud-slinging is now a thing of the past for me. We are not going to go back and forth anymore around that,” He added later.

Both teams will now play the second of the three-match Test series against each other in Manchester from the 25th of August. South Africa is currently leading the series with a score line of 1-0. 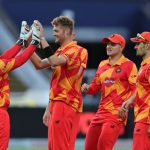