The prediction game in cricket is on the rise these days. Legendary Shane Warne was known for his accurate predictions ever since he became a commentator post-retirement. There are many twitter accounts that predict the action before it happens and leave us awestruck when it turns out to be true.

In one such incident, a Twitter user by the name @sooryasesha7 made a bold prediction about the Day 3 of the ongoing fifth Test between India and England. The user predicted the partnership of Jonny Bairstow and Ben Stokes will trouble India during the first hour of the Day’s play and the stand to be finally broken by Shardul Thakur.

The tweet reads “Prediction for today: Stokes-Bairstow to reignite the BazBall hype and tee off in the first hour…only for Lord Shardul to intervene and break the stand #ENGVIND

The bold prediction turned out to be true as the duo of Stokes and Bairstow put on a stand of 66 runs between them. Both batsmen started playing in an aggressive manner hitting one boundary after the other before Thakur finally broke the partnership by dismissing Ben Stokes.

Thakur earlier dropped Stokes on the bowling of Mohammad Shami who was in the middle of an intimidating spell. Stokes got another life just one ball before he was dismissed as captain Jasprit Bumrah failed to capture the ball between his palms. The allrounder was finally dismissed on the very next ball as Bumrah who was fielding at mid-off dived on his left side to complete a brilliant catch. England Captain was dismissed on the score of 149 for 6.

But Jonny Bairstow continued the onslaught from the other end and took the Indian bowlers to the cleaners with his effortless hitting all around the ground. England were 200 for 6 trailing by another 216 runs before the rain came and early lunch was taken. India are looking for a first-innings lead but Bairstow is standing as a big hurdle in their way. 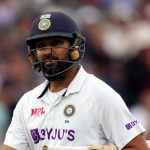