Virat Kohli decided to step down as India’s Test captain on Saturday. He made the decision just a day after the team’s demoralising Test series defeat to South Africa. With Kohli calling it a day on his Test captaincy, it marked an end of an era. Kohli was always known as an aggressive skipper, someone who always gets into the skin of the opposition. Thus, he was always surrounded by controversies. Here’s a look at some of the controversies during Virat Kohli’s captaincy career.

Anil Kumble was appointed as Team India’s head coach in July 2016 for a year, till the Champions Trophy. However, Virat Kohli had reportedly made it clear to his former Bangalore captain that he was not convinced with the latter’s tactics and extreme strictness. If reports are to be believed, Anil Kumble had advised Virat Kohli to bat first on winning the toss against arch-rivals Pakistan in the Champions Trophy 2017 final but Kohli did exactly the opposite. The Men In Blue suffered a humiliating 180-run defeat after which the spin legend had expressed his displeasure to continue as the national team’s coach and resigned from the post.

This happened during the second Test against Australia in March 2017. While chasing an easy total of 188 to win the series at the M Chinnaswamy Stadium in Bengaluru, Steve Smith was caught plumb in front of the wicket by Umesh Yadav. After the 15-second DRS time limit, Smith consulted the players in the dressing room before Virat Kohli intervened and the former had to walk back to the pavilion. When asked about the same in the post-match press conference, the then Australian skipper said that he had suffered a ‘brain fade’ moment. His opposite number Kohli said that the visitors had been resorting to such tactics on a couple of occasions, adding that Australians are not friends anymore.

The stump-mic controversy at Cape Town:

The incident took place on Day 3 of the high-voltage series-deciding third Test match between India and South Africa at Newlands, Cape Town. Offie Ravichandran Ashwin had trapped skipper Dean Elgar plumb in front of the wicket. There was a huge appeal from the Indian players and Marias Erasmus raised his finger instantly. Elgar reviewed the decision and the ball tracker showed that the ball would have gone above the stumps. The decision was overturned as Virat Kohli, his deputy KL Rahul and Ashwin vented out their frustrations at the broadcaster SuperSport. “You should find better ways to win Supersport. Focus on your team as well when they shine the ball, eh! Not just the opposition. Trying to catch people all the time”, Virat Kohli was heard saying.

While announcing the India Test squad for the South Africa series, BCCI unanimously named Rpht Sharma as ODI captain and sacked Kohli. later, BCCI President Sourav Ganguly revealed that he personally requested Virat Kohli to stay as T20I captain in order to lead the team in ODIs as BCCI doesn’t want split captaincy in limited-overs cricket. However, denied all the claims in a fiery press conference before departing for South Africa and revealed that BCCI only informed him about half an hour ago. 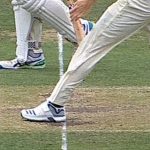