After defeating Australia in what was a monumental comeback, India will set focus on the next challenge against England. India will play England in a 4-match Test series. England will be brimming with confidence after a superb display against Sri Lanka recently.

At no 5 comes G. Viswanath’s terrific knock against England at Madras back in 1982. Batting for at least 643 minutes, Viswanath played 374 balls to reach a total of 222. He found help from his strike partner Yashpal Sharma, who contributed with 140 runs. India went on to declare their innings at 481. England could only muster 328 in return. The Test resulted in a draw.

At no 3 is Virat Kohli’s knock of 235 against England at Mumbai in 2016. Batting first, the visitors put up 400 on the board. Kohli played 340 balls, in which he amassed 25 fours and one six in total. By the time Kohli got out, India already had 600 runs on the board. Murali Vijay and Jayant Yadav also amassed a ton each. India went on to win the match by an innings and 36 runs.

At no 2 is Sunil Gavaskar’s incredible innings of 221 against England at the Oval back in 1979. With England setting a total of 438 to chase, India needed someone to deliver. Sunil Gavaskar batted on the crease for 490 minutes. During that duration, Gavaskar faced 443 balls. India was bowled out for 428 and the match finished with a draw.

At no 1 is Karun Nair’s innings of 303 against England at Chennai in 2016. With this innings, Nair became the 2nd Indian to register a triple hundred in Test history. Nair was on fire, as India went to register a record-high total of 759. India won the Test match with an innings and 87 runs. 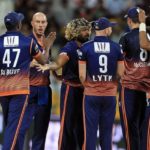