The Indian team has been on a rampage in Test cricket. They have not lost a Test series since their 2-0 loss to New Zealand in 2019-20. Since then, they have played against Australia and England and emerged victorious on both occasions. However, the upcoming tour to England will be a big Test for team India. They have not won a Test series in England since Rahul Dravid led them to a series victory in 2007. In their previous series, they were humbled by the host 4-1.

Virat Kohli will be key to India’s success. The Indian skipper was the highest run-getter for his team on their last tour to the UK. He’ll look to replicate his performance and lead India to an elite series win over England in England. Let’s look at some of the best knocks of Virat Kohli against England in England.

England is not an easy country to bat, especially against the likes of James Anderson and Stuart Broad. However, if you are Virat Kohli, nothing is difficult for you. India were 2-0 down and needed a win to keep the series alive. Batting first, India posted a strong 329 on back of a brilliant 97 from Virat Kohli before bowling out England for 161. In the second inning, Kohli smashed a magnificent 103 to set the game for India. England did bat well in the second inning and posted 317 but lost the match by whopping 203 runs.

The trait of a great batsman is that he never repeats his mistake. Kohli had a horrific tour to England in 2014 but the next time he arrived in the country, he was a much-improved batsman. He worked on his issues and made merry in the series. In the first Test in Birmingham, England posted 287 in their first inning before leaving India reeling at 100-5. However, Kohli stood tall and stroked a magnificent 149 to take India close to England’s score. India then bowled out England for 180 and needed 193 to win. However, apart from Virat Kohli, who smashed a gritty 50, none of the Indian batsmen could resist the English bowling as they were bundled out for 162, losing the match by 31 runs.

India were thrashed 4-0 in the Test series and were 2-0 down in the ODIs. It was the final game of the series and India needed a win to escape a clean sweep. Batting first, Virat Kohli smacked a brilliant 107 to help India post a strong 304-6. However, the match was curtailed due to rain and England were given a revised target of 241. The shortened game worked in England’s favour and they clinched the match by 6 wickets. Jonny Bairstow played a blinder of 41 in 21 balls to take England home. 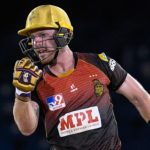