Gujarat Giants and Manipal Tigers locked horns with each other in the third match of the Legends League Cricket 2022. Gujarat Giants’ skipper and former Indian opener Virender Sehwag won the toss and asked the Manipal Tigers to bat first at the Ekana Stadium in Lucknow. Batting first Manipal Tigers posted a decent total of 120 runs for the loss of eight wickets.

While chasing the target, Giants managed to score 121 runs in 17.2 overs and win the match by two wickets. Former Indian wicketkeeper-batter Parthiv Patel scored 34 runs off just 17 balls with six boundaries and a six to his name.

Cricket fans also reacted to the close win of Gujarat Giants in the third encounter of the Legends League Cricket. They took to Twitter for appreciating the performance of the Gujarat Giants

Here’s how Twitter reacted to the win of Virender Sehwag & co.

There was no doubt that this was an exciting fight! You did a great job, Tigers. 🥰

Manipal tigers couldn’t get a good start as they lost their three wickets only on 22 runs. Although, the 32-run knock of Ravikant Shukla and crucial 24 runs scored by former Indian cricketer 24 runs off 29 balls with two sixes and a six to his name. Ashok Dinda and Tillakaratne Dilshan scalped two wickets each for Giants.

While chasing the target, Parthiv Patel and Kevin O’Brien scored 34 and 22 runs respectively. Besides these, the former Sri Lankan all-rounder scored 22 runs off 20 with four boundaries on his credit. On the back of these vital knocks, Giants won the match by two wickets and crossed the line in 17.2 overs. Parvinder Awana, Harbhajan Singh, and Muthiah Muralitharan scalped two wickets each for Manipal Tigers.

Parthiv Patel Was adjudged player of the match for his brilliant match-defining performance. 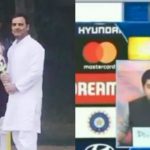