International Cricket Council (ICC), on November 16 (Tuesday), announced the hosts for the mega events for the next cricketing cycle 2024-2031. In a bid to expand the game globally and with potential market in the USA, the cricketing body awarded them the hosting right along with West Indies for the 2024 edition of the 20-20 World Cup.

Cricket West Indies (CWI) and USA Cricket hailed ICC’s decision and called it a historic announcement and felt this will hugely transform the sport in the Americas region.

“The joint bid is part of a strategic partnership between CWI and USA Cricket which aims to unlock the potential of the USA and fast track the growth of the sport; to inspire the next generation of young West Indians and ignite the cricketing passion in the Caribbean; and to combine these two forces for the benefit of world cricket,” the boards said in a joint statement according to Cricbuzz.

It will be the first time that as many as 20 teams will feature in the 2024 20-20 World Cup. 55 matches will be played over the course of 25 days with the tournament set to be played in June. Soon after ICC confirmed the hosting rights, the two boards confirmed the number of matches allotted to each other.

The Caribbean board will host 35 matches across 13 grounds while USA got their share of 20 matches which will be played in five venues approved by the ICC. “All of the venues across both countries will be selected following a competitive tender process to be run over the coming months,” the CWI and USA Cricket further said. 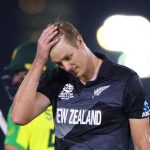